A downloadable game for Windows, macOS, and Linux

Detect And Destroy has been made for the Godot Wild Jam #11. Thus the game has been made with Godot. See the licence in the downloadable files or here.

The jam's theme is Parallel Dimensions, so I made two games in parallel that you can play in parallel with two parallel players! Also there are aliens from a parallel dimension in it. Please see the How To Play section below since I wasn't able to put an in-game tutorial together and there are some things to explain.

You and your best friend have joined the Earth Space Defence forces and are on a mission to protect your home planet from unfriendly aliens. They have mastered inter-dimensional travel and send their fleets to conquer what they see.

On your mission you will encounter mother ships that are hidden for your scanners and weapons in a parallel dimensions. Wouldn't be so bad if it didn't spam fighters your way by teleporting them into our own dimension! Luckily earth scientists have developed a device for pulling alien mother ships through rifts in space for you to shred them.

What do you say? The targeting device is broken? Oh dear, and no mechanic is near! So you have to manually grab the crystals that power the device and find the right combination. Onward!

On the starting screen select the mode of play. You can play solo and chose between Puzzle and Shmup or get a friend and play together.

The shmup part is pretty straight forward. Use A and D or the arrow keys to move your ship and space (you can hold it) to fire your gun. The alien mother ship will be hidden on each level you enter and spawn small fighters you can shoot. Dodge their fire, though, as you can only repair between levels.

You will find the puzzle game on the right side of the screen. In the first level you will have to find the right combination of three crystals of four possible kinds. A combination can have more than one crystal of a kind. Just drag and drop the crystals from the left column into the boxes on the right, starting at the bottom row. If you have dropped a crystal into each socket, you can click the Activate button at the top. If you wish to generate a random row, hit the Random button.

After activating a row you will see indications at the far right how close your combination was. Each yellow light lit (bottom row of lights) means you have one crystal of the right kind, while each green light lit (upper row) means one crystal of the right kind is also at the right position. So you have found the correct combination if there are as many green lights as there are crystals in the row. In later levels the number of crystal kinds and crystals per combination increases.

To find the solution combine the information you have about each row. If you have activated the last row and were not able to solve the puzzle the board will be emptied and a new crystal combination is generated, so you have to start over.

There are third party assets used in the game. Please see the licence files in the downloadable files for details.

I added a comment, but where can I vote for your game? ;)

you can vote on the game's submission page for the jam. Hope you liked it!

Found it and voted for your game ^^

Thanks, I appreciate it. :) 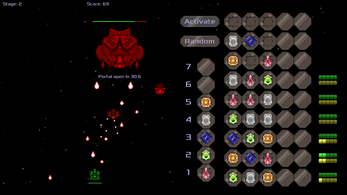 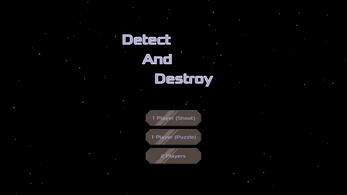 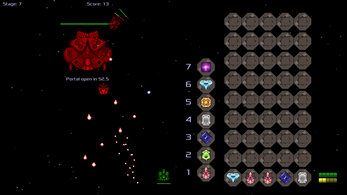