Made in Godot for the Trijam: The Ultimate Mega Extreme edition in 9 hours. The theme I chose is "+1", you guessed it! Towers Of Plusonedor is a strategy game where you use towers to gain points. It can be played by two players locally or by one player against a computer player. I wanted the computer player to be an actual challenge, but it was harder than I had hoped, even though it is a simple game and I put a large amount of the development time into it.

As I didn't manage to put in a tutorial, please read the "How to play" section down below.

Due to restrictions when exporting for HTML5 the "hard" difficulty is not available in the web version. Technically it's working, but it get's so unresponsive I decided to not allow it. If you'd like to try it out (it's slow, be warned!) please get the downloadable version.

Towers Of Plusonedor is played with a mouse. You have two possible actions: place a new tower or move one of the towers you already placed. After you pick your turn's action, the other player gets their turn and so on.

To place a new tower click with the left mouse button on an empty space of the game board. Each player can have at most five towers in the game at any time. Should you have any towers left to place they are listed in the HUD (top for Player 1, bottom for Player 2).

If a tower is placed adjacent to one or more towers (your own our your opponent's!) the adjacent tower(s) gain one level, up to a maximum of level 9.

A tower can move one space per turn. Move a tower by clicking with the left mouse button on it and drag the mouse while holding the button down. The tower you are about to move is indicated by a shadow that follows the cursor. If the tower is above the space you want to move it to, release the mouse button.

There are three possible situations:

When you attack an opponent's tower with one of your own, your tower deals damage equal to it's level. Damage dealt is subtracted from the defender's level. If a tower's level falls below 1, the tower is removed and can be re-placed in any of the owner's subsequent turns as usual. The attacker then moves to the target space.

If the defender's level is still at least 1 after the attack, it will retaliate and deal damage to the attacker equal to it's new (i.e. lowered) level. This can cause the attacker's level to fall below 1 and thus get removed. The defender will stay in it's place however.

To win the game a player has to score 50 points total. A player gains points equal to a tower's level for each own tower on the board. This score is calculated anew after each turn. A player is also awarded one point for each damage dealt during an attack.

Example: Player 1 has towers of level 2 and 4, Player 2 has towers of level 1, 2 and 3. Player 1 uses the level 2 tower to attack the level 3 tower. The attacker deals 2 damage, so Player 1 gains 2 points. The defender retaliates and deals 1 damage equal to 1 point for Player 2. Player 1 lost 1 tower level during the attack and has a net gain of 1 point for this turn. Player 2 lost 2 levels, causing a net loss of one point.

This game was made in Godot. The font, sound effects and music are the work of others:

See also the licence information included in the downloadable archives and linked on the web version's landing page for details.

This is fun to play! It took me a moment to figure out how towers enter and exit the board, but once I got the hang of it, I enjoyed the strategy. 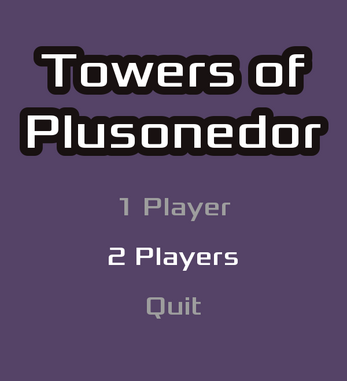 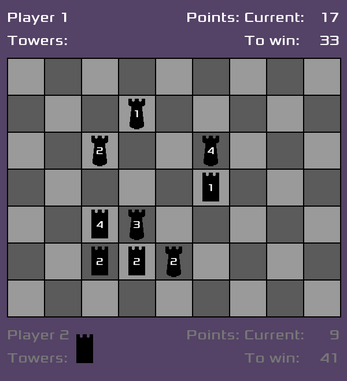 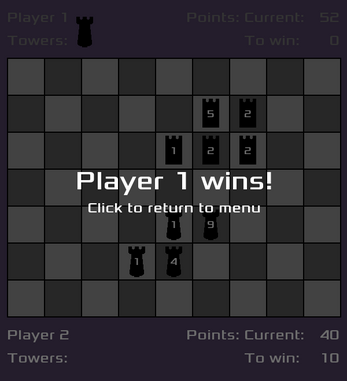